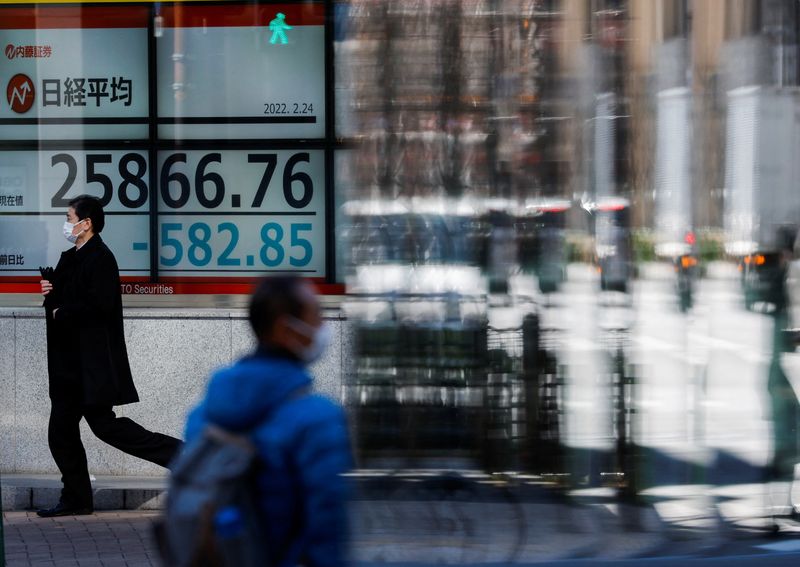 NEW YORK (Reuters) -The benchmark hit its highest in over a decade on Monday and the dollar strengthened as investors were on edge before an expected hefty Fed interest rate hike this week to tackle inflation.

The 10-year’s yield shot to 3.518%, its highest since April 2011, before backing off. The higher yield helped strengthen the dollar and made gold less attractive as concerns about the economy in light of higher rates cooled risk taking.

But stocks on Wall Street rallied as hedge funds positioned themselves on the off-chance the Fed’s tone is less onerous than markets expect when policymakers raise rates on Wednesday, said Michael James, managing director of equity trading at Wedbush Securities in Los Angeles.

“There’s positioning going on just in case there’s something that comes out of the Fed that proves to be less hawkish. I don’t think anyone is predicting that’s going to happen,” he said. “The majority of people are in the negative camp right now.”

Stock trading on Wall Street and in Europe was choppy for most of the session as central banks around the world were expected to increase borrowing costs this week and slow economic growth.

“Our biggest concern now, and the reason why you’re seeing such choppiness in the market today, is that there’s more uncertainty about earnings now, in addition to the concern over rate hikes,” Lip said.

“We may be going in for a hard landing rather than a soft landing and the hard landing being the Fed perhaps over-tightening in a situation where we’re already seeing the economy decelerate,” he said.

After the past three Fed meetings, there have been relief rallies in bonds and equities as markets interpreted Powell as being dovish. But a rally this time is unlikely when policymakers conclude a two-day meeting on Wednesday, he said.

“People are wising up to the fact that the Fed means business,” he said. “The only way to contain this inflation is to get ahead of it, and they’re still behind the curve. Peak hawkishness is getting closer, but we’re not there yet.”

Markets are pricing in a 75 basis points hike, with futures showing an 18% chance of a full percentage point increase on Wednesday, according to CME’s FedWatch Tool.

Markets also indicate a real chance that rates could hit 4.5% by March as the Fed is forced to tip the economy into a recession to subdue inflation.

Most of the central banks meeting this week – from Switzerland to South Africa – are expected to hike, with markets split on whether the Bank of England will move by 50 or 75 basis points.

The other exception is the Bank of Japan, also due to meet this week, and which has shown no sign of abandoning its ultra-easy yield curve policy despite a drastic slide in the yen.

Trading was thin in Britain as markets were closed in observance of the state funeral of Queen Elizabeth.

The dollar rose 0.21% against the yen, backing off from the 24-year peak of 144.99 two weeks ago amid increasingly strident intervention warnings from Japanese policymakers.

Oil prices edged up in volatile trading as worries of tight supplies outweighed fears that global demand could slow due to a strong dollar and possibly large rate increases.

Investing.com– Most Asian stock markets fell on Monday as investors fled risk-driven assets ahead of a U.S. Federal Reserve meeting later this week, while a holiday in Japan made for diminished trading volumes.

Most major bourses in Asia extended losses from last week, with a two-day Fed meeting, starting on Tuesday, widely expected to result in a 75 basis point (bps) interest .

Concerns over the hike battered stock markets last week, as expectations for a hawkish move were cemented by hotter-than-expected U.S. .

Traders are also pricing in the possibility of a surprise 100 bps hike by the Fed, given the stubbornness of U.S. inflation. Focus will also be on the Fed’s inflation expectations, which are likely to guide monetary policy for the remainder of the year.

China’s and indexes fell slightly lesser than their peers after Southern megacity Chengdu on Monday. The move is expected to help spur a recovery in Chinese economic activity.

The People’s Bank of China also on Monday, and increased its rate of cash injections into the economy as it acts to revive growth in the country.

Chinese stocks have been somewhat underpinned in recent months by expectations that Beijing will continue to increase spending and loosen policy to revive economic growth. The Communist Party recently signaled that it would ramp up stimulus measures in the ongoing quarter.

Economic readings from China show that the country is struggling with slowing growth and dimming prospects due to its strict zero-COVID policy.

Asian markets are also focusing on central bank meetings in , and this week for more cues on how central bankers intend to tackle rising inflation.

While the Philippines and Indonesia are expected to raise rates, the Bank of Japan has so far signaled no such intent, given that the Japanese economy is still reeling from the COVID-19 pandemic.