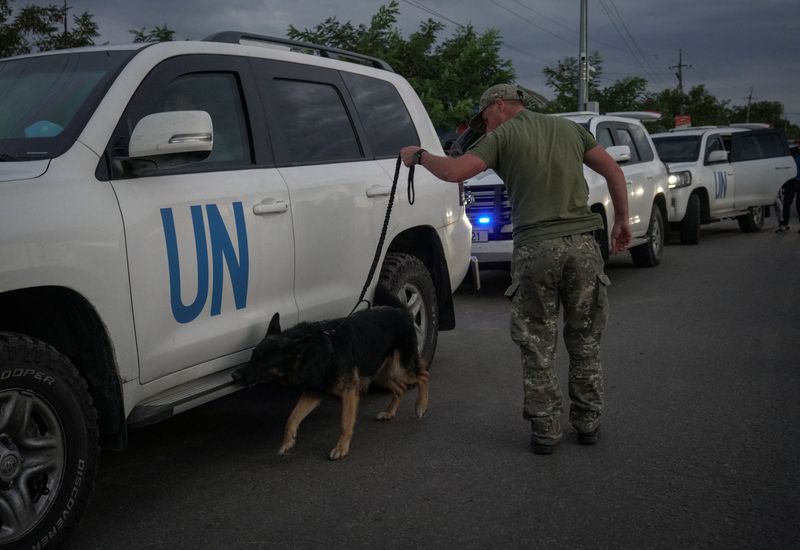 © Reuters. Ukrainian serviceman with a dog checks a motorcade transporting a part of the International Atomic Energy Agency (IAEA) mission coming back from a Zaporizhzhia nuclear power plant, amid Russia’s invasion of Ukraine, at a Ukrainian checkpoint in Zaporizhzh

ZAPORIZHZHIA, Ukraine (Reuters) -Rich countries agreed on Friday to try to cap the global price of Russian oil, while Russia delayed the re-opening of its main gas pipeline to Germany, as both sides raised the stakes in an energy war between Moscow and the West over Ukraine.

Russia’s state-controlled energy giant Gazprom (MCX:) blamed a technical fault in the Nord Stream 1 pipeline. But the high-level manoeuvres in energy politics underlined the pervasive impact of the conflict, far beyond Ukraine’s borders.

The announcements came as Moscow and Kyiv traded blame over their actions on one of the war’s most dangerous frontlines – the Russian-occupied Zaporizhzhia nuclear power plant, where U.N. inspectors arrived a day earlier on a mission to help avert a catastrophe.

Gazprom said it could no longer provide a timeframe for restarting deliveries through the pipeline, an announcement that will deepen Europe’s difficulties securing fuel for winter at a time when it faces an energy-driven surge in living costs.

Nord Stream 1, which runs under the Baltic Sea to supply Germany and others, had been due to resume operating after a three-day halt for maintenance on Saturday at 0100 GMT.

Moscow has blamed sanctions, imposed by the West after Russia’s invasion of Ukraine, for hampering routine operations and maintenance of Nord Stream 1. Brussels and Washington accuse Russia of using gas as an economic weapon.

The United States said it has been collaborating with Europe to ensure sufficient supplies are available for winter.

Earlier on Friday, finance ministers from the Group of Seven wealthy democracies – Britain, Canada, France, Germany, Italy, Japan and the United States – said a cap on the price of Russian oil was meant to “reduce … Russia’s ability to fund its war of aggression whilst limiting the impact of Russia’s war on global energy prices” which have soared.

The Kremlin – which calls the conflict “a special military operation” – said it would stop selling oil to any countries that implemented the cap.

The six-month-old Ukraine conflict has killed thousands and reduced cities to rubble. In recent weeks fears have grown over a potential disaster at Zaporizhzhia, Europe’s biggest nuclear power plant.

Grossi, after returning to Ukrainian-held territory, said the physical integrity of the plant had been violated several times. On Friday he said he said he expects to produce a report early next week, and two IAEA experts would stay on at the plant for the longer term.

The site sits on the south bank of a huge reservoir on the Dnipro River, 10 km (6 miles) across the water from Ukrainian positions.

Both sides have accused the other of shelling near the facility which is still operated by Ukrainian staff and supplies more than a fifth of Ukraine’s electricity in peacetime. Kyiv also accuses Russia of using it to shield its weapons, which Moscow denies. Russia has so far resisted international calls to pull troops out of the plant and demilitarise the area.

Ukraine’s state nuclear company said Russia had barred the IAEA team from the plant’s crisis centre, where Kyiv says Russian troops are stationed, and that would make it difficult to make an impartial assessment.

“Unfortunately we haven’t heard the main thing from the IAEA, which is the call for Russia to demilitarise the station,” Zelenskiy said in a video streamed to a forum in Italy.

Russian Defence Minister Sergei Shoigu said Ukraine was continuing to use weapons from its Western allies to shell the plant, raising the risk of a nuclear catastrophe. He rejected assertions by Kyiv and the West that Russia had deployed heavy weapons at the plant.

A reactor at the site was reconnected to Ukraine’s grid on Friday, a day after it shut down due to shelling near the site, Energoatom said.

Ukraine started an offensive this week to recapture territory in southern Ukraine, mainly further down the Dnipro in neighbouring Kherson province.

Both sides have claimed battlefield successes in the initial days of what Ukrainians bill as a potential turning point in the war, although details have been scarce so far, with Ukrainian officials releasing little information.

“Our successes are convincing and soon we will be able to disclose more information,” she said.

Moscow has denied reports of Ukrainian progress and said its troops had routed Ukrainian forces.

Reuters could not independently verify those claims.

Ukraine’s general staff on Friday said Russian forces had shelled dozens of cities and towns including Kharkiv – Ukraine’s second largest city – in the north and in Donetsk region in the east.

By John Davison, Parisa Hafezi and Laila Bassam BAGHDAD (Reuters) – When a pronouncement by a religious scholar in Iran drove Iraq to the brink of civil war last week, there was…

By Tom Balmforth ZAPORIZHZHIA, Ukraine (Reuters) – As UN inspectors sought to avert a nuclear disaster on Ukraine’s frontline, the West and Russia wounded each other’s economies,…

By Christoph Steitz and Caleb Davis FRANKFURT/GDANSK (Reuters) – Russia has scrapped a Saturday deadline to resume flows via a major gas supply route to Germany, deepening…