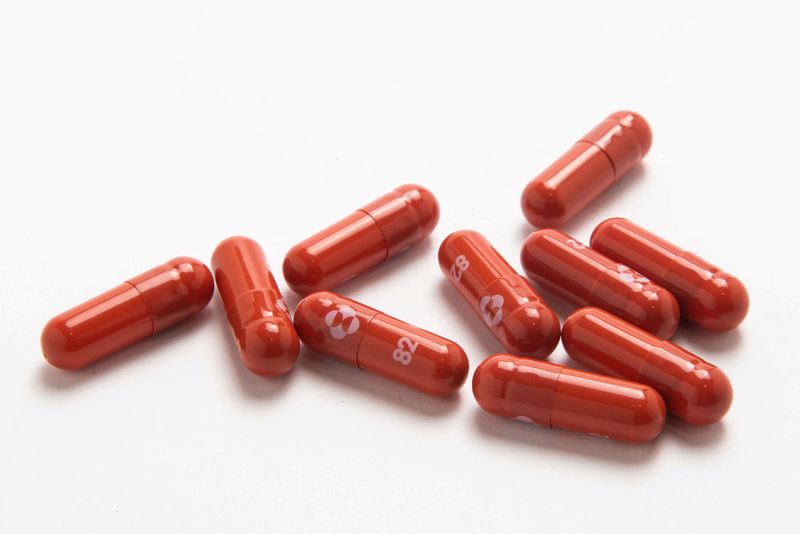 By Michael Erman and Manas Mishra

(Reuters) – A panel of expert advisers to the U.S. Food and Drug Administration on Tuesday narrowly voted to recommend the agency authorize Merck & Co’s antiviral pill to treat COVID-19.

If the FDA authorizes the drug, it would be the first at-home treatment for the virus nearly two years into the pandemic. The authorization would likely be limited to patients at high risk of developing severe disease, although the exact population would be defined by the agency.

Merck published data last week suggesting the drug was significantly less effective than previously thought, reducing hospitalizations and deaths in its clinical trial of high-risk individuals by around 30%.

“COVID-19 is still an emergency situation,” said committee member Dr. David Hardy, who voted yes. “There is a need for something like this. This is the first opportunity that an oral outpatient medication for mildly symptomatic to moderately symptomatic persons would be available, although I do have questions about its overall longer-term efficacy.”

The vote comes as fears about the new Omicron variant have rattled financial markets and sparked concerns about the strength of the global economic recovery as the world continues to fight the coronavirus pandemic.

Merck’s oral therapy called molnupiravir, developed with Ridgeback Biotherapeutics, targets part of the virus called the RNA polymerase that has not been changed much by mutations in the Omicron variant. The pill – and a potentially more promising drug being developed by Pfizer – could become even more vital if vaccine-induced and natural immunity are threatened by the variant.

“If you look at the sequence of the of the RNA polymerase, the sequence of the Omicron variant is not very different from all of these other variants, so you would predict that it should be equally active,” Merck scientist Daria Hazuda said in an interview.

Pfizer Inc (NYSE:)’s rival pill Paxlovid showed an 89% reduction in hospitalizations and deaths in its clinical trial. The FDA could consider that drug within the next few months.

The FDA’s Antimicrobial Drugs Advisory Committee voted 13-10 to recommend the agency authorize the drug after discussing concerns the drug could cause the virus to mutate as well as safety concerns about the potential for birth defects. Both FDA staff scientists and Merck have suggested the drug should not be recommended during pregnancy.

Several members said the reduced number of COVID-related deaths in people who received the drug in the trial convinced them to vote in favor of recommending authorization. Only one patient in the molnupiravir arm died, versus nine in the placebo group.

Merck expects to produce 10 million courses of the treatment by the end of this year, with at least 20 million set to be manufactured in 2022.

The U.S. government has a contract to buy as many as 5 million courses of the drug at a price of $700 per course. By comparison, the U.S. paid around $20 a dose for its supply of the two-dose Pfizer/BioNTech vaccine.

Disclaimer: Fusion Media would like to remind you that the data contained in this website is not necessarily real-time nor accurate. All CFDs (stocks, indexes, futures) and Forex prices are not provided by exchanges but rather by market makers, and so prices may not be accurate and may differ from the actual market price, meaning prices are indicative and not appropriate for trading purposes. Therefore Fusion Media doesn`t bear any responsibility for any trading losses you might incur as a result of using this data.

Fusion Media or anyone involved with Fusion Media will not accept any liability for loss or damage as a result of reliance on the information including data, quotes, charts and buy/sell signals contained within this website. Please be fully informed regarding the risks and costs associated with trading the financial markets, it is one of the riskiest investment forms possible.